Is it worth limiting the usage of smartphones? And why?

Smartphone has become an essential part of our everyday life. For many years now it ceased being used only to make calls and send text messages. Affordability resulted in more and more people having smartphones and often not just one. Also, users are increasingly younger. The term "generation always on” is getting increasingly popular - these are the people that practically do not know and do not remember times without access to the Internet.

According to the research carried out by the Pew Research Centre from 2011 number of Americans who use smartphones rose from 35% to 77%, while 95% has any mobile phone[1]. At the same time, there are more and more opinions that the use of Blackberry smartphones should be limited. Is this true?

First, it should be noted that the commitment to smartphones started with their increasingly developed features and capabilities used both in private and professional life, including even such simple functions as notes or calculator or photo camera. Being online in practically anytime and anywhere significantly enhances and speeds performing various daily activities such as shopping, placing orders, reservations and many more. Convenience and comfort that the smartphones give us made us use them more and more and have them with us practically all the time, which unfortunately leads to addiction. The very rapid development of mobile devices and online services created many new addictions and civilization diseases such as nomophobia - the fear of inability to use a mobile phone, phonoholism - which, according to research conducted by CBOS, affects 92% of Poles[2], network addiction, internet sociomania, FoMO (fear of missing out[3]) etc. "SecurEnvoy, a security company, carried out research which showed that in the United Kingdom 66% of people has some form of nomophobia. 41% of research participants have at least two devices so that they stay in touch".[4]

Another negative effect of excessive commitment to smartphones, according to many psychologists, is strengthening the egoistical behaviour and decrease empathy. Being constantly online on all kinds of chats and social media, we care less and less about real-life relationships. Recently dangerously grows the hate phenomenon due to the anonymity. Hate leads to depression and even suicides. We become a less pro-social society. We focus on our image on social media. Extraversion has significantly increased and the lack of interest or "likes” generates frustration.   “Dr Yalda T Uhls from the University of California has conducted an experiment to which she invited children aged 12 to participate in the five days camp. Children could not use any media devices basing only on face-to-face communication. It turned out that after returning from the camp students were recognizing the emotions of other people better than their peers, who were in the school using new technologies daily[5]. Often by preserving the relationships in social networks, one gives up to the illusion that we are surrounded by a circle of friends and there is no need of change in our social relations when in fact we are lonely.

More physical ailments connected excessive use of smartphones are diagnosed. One of the most mentioned conditions are:

Ongoing researches carried out on 11 thousand Children by the National Institutes of Health show that those that use smartphones over 7 hours per day are exposed to changes in the brain leading to the reduction of cerebral cortex, thus leading to lower IQ, weakening of cognitive skills and language functions[7].

There are also discussions about the harmfulness of mobile phones radiation. Listening to the music and other operations on the smartphone, such as typing text messages cause our distraction and leads= in e, g. to many road accidents. What is more, easy access to information aggravates our memory and imagination - so-called Google effect[8].

But it cannot be denied that the Internet and mobile access to it bring also many positive effects. It inter alia allows saving time that we can spend on relations with loved ones and to obtain the necessary information or make contacts possible.

To sum up, it should be noted that young people and children are most vulnerable to the negative consequences of frequent use of Blackberry smartphones. They do not know times without the Internet and thus have no comparison of how their relations with peers could look like. Therefore, it is necessary to draw attention to the problem of addiction and depression. As usually, views on this situation are divided. While some demonise Internet and mobile devices, other people notice their advantages and usefulness. We must, first of all, remember that the smartphones, tablets or the Internet do not constitute threats on their own, and our habits and the way in which we use the devices depend fully on us[9]. 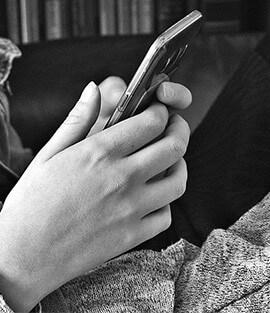